The White Stuff – How Snow is Made Indoors 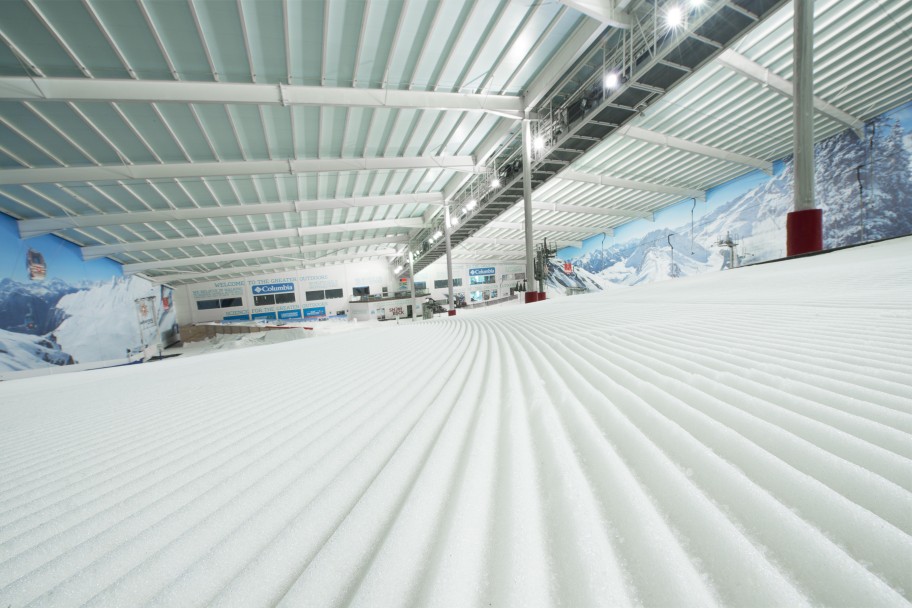 Fresh & falling, morning corduroy or waist deep powder; snow is a ‘hot’ topic whether you’re a skier or a snowboarder, seasonaire or holiday maker.

Snow conditions are not always the make or break of a mountain ski or snowboard holiday; plenty of fun can be had on blue bird day with only a light snow covering, or a white-out complete with heavy snowfall and endless powder laps. That said, knowing the snow forecast can help you find the sweet spots during your day on the hill.

But, mountain snow forecasts provide no guarantees of snowfall, and they can’t tell you which pistes will already be heavily tracked before you reach them, or whether there’s too much or too little snow to optimise your enjoyment. With all the variables and personal preferences, guaranteeing mountain snow conditions to suit everyone is just about as simple as night skiing without the floodlights.

Therefore, it comes as no surprise that making and maintaining snow indoors is no easy run either. Luckily, indoor centre’s like The Snow Centre have a bunch of experienced snow experts making the white stuff through the night.

How Snow is Made Indoors?

Just like on the mountains, indoor snow is made using a cold environment, water and air. At The Snow Centre Hemel Hempstead a cold environment is created in what’s known as the ‘ski box’, an enclosed area around The Snow Centre’s slopes. In some ways, the ski box is a bit like a giant fridge, which is why ski and snowboard slang has evolved the use of terms like ‘fridge kids’, to refer to kids that regularly ski or snowboard at an indoor, real snow slope.

The snow making at the Hemel Hempstead slope, requires water, air, temperature control, timing, a large water tank and pump, 8 powerful snow guns mounted on the gantry, 2 portable guns and a ‘snow’ load of knowledge and experience to get it right.

Unlike the snowflakes that fall to the ground in a mountain ski area, indoor centres make snow crystals. In the mountains, crystals are found in the clouds before they turn to snowflakes, these pure crystals are also what falls on The Snow Centre’s Slopes at night. It takes 10 snow guns running for 4 hours to create 2mm of snow spread evenly over The Snow Centre’s slopes. With the snow laying half a metre thick – there’s a lot of snow making to do!

How is the Snow Maintained?

To keep ‘the fridge’ or ‘ski box’ cold, 30,000 litres of anti-freeze is cooled in 2 large chillers and pumped under the slopes and into the area up on the gantry (a walkway that runs along the ceiling). Because the underfloor coolant keeps the snow cold, the air temperature can be kept at -2 degrees during daytime skiing; this is a lot more agreeable than the night time snow making chill of -6 degrees.

As The Snow Centre is open all year round, there’s no time for ‘old’ snow to melt; so to maintain good quality conditions the old stuff must be removed regularly. Snow becomes ‘old’ when it’s skied or groomed often by the piste basher; which causes the snow to break down, become soft and sugary and more importantly becomes less fun for Snowsports lovers.

Most of us want to ski the best snow possible, so you will be pleased to know, protecting the snow quality is a huge priority for The Snow Centre Team. It's also the reason why after night time grooming the snow is left to settle for at least 6 hours so it can go hard again.

Who Makes the Snow & When?

If you’ve ever wondered WHO makes the white stuff on The Snow Centre’s indoor slopes - you should be sure to meet ‘keeper of the snow’ David Wilkinson and his Team.

David’s team consists of ‘slope groomers’, who drive the piste basher and remove old snow from the slope. They are experts in making and maintaining indoor snow. Working through the night to ensure the rest of us can have fun on the slopes during the day, the snow maker’s role varies depending on how busy the slope has been, and what sessions have taken place on the slope.

With different slope activity impacting the snow in different ways, the slope will require more or less snow making, longer or shorter periods for the snow to fall and settle, and greater or reduced removal of snow from one day to the next. The snow making role is reactive as well as proactive!

For more information on snow conditions at The Snow Centre take a look at the 7 day forecast.