How to Become a Pro Skier – Mike Rowlands

Many of us have a passion for skiing, there’s something rewarding and charming about sliding on snow. So, it’s not surprising that the idea of skiing for a living sounds appealing, and then we find ourselves considering, ‘how do I become a professional skier.’

20 year old, pro freestyle skier, Mike Rowlands has sliding on snow in his blood. Both him and his sister, Madi Rowlands have skied on The Snow Centre’s Freestyle Team for years. Now they’re both part of GB Park & Pipe, the British Ski and Snowboard squad, that sees Great Britain’s most talented competing internationally all over the world.

Today, Mike shares what it took to become a pro skier…

How did you become a professional skier?

“My parents are both keen skiers, so I’ve skied with my family since I was a baby. By the time I was twelve weeks old I’d already been on two ski holidays. I started entering competitions around the UK when I was about ten and my results were seen by the GB coaches who then encouraged me to train and enter more competitions.

I found out about the SFR competitions in France and entered those for two or three years and gradually progressed up the rankings by entering Europa cups where I gained enough points to get onto the World Cup circuit. At the end of last season, I was selected for the GB Park & Pipe team.”

There are different types of professional skiing, how did you know you wanted to be a freestyle skier?

“There was never any question for me, as soon as I saw freestyle, I knew that it was for me! I spent most of my teen years following freestyle skiers, watching their videos and learning their tricks. I met Pro Freestyle skiers, Bobby Brown at the London Freeze and I also got the chance to ski with Sammy Carlson and Willy Borm in Les 2 Alpes, and that sealed it for me.” 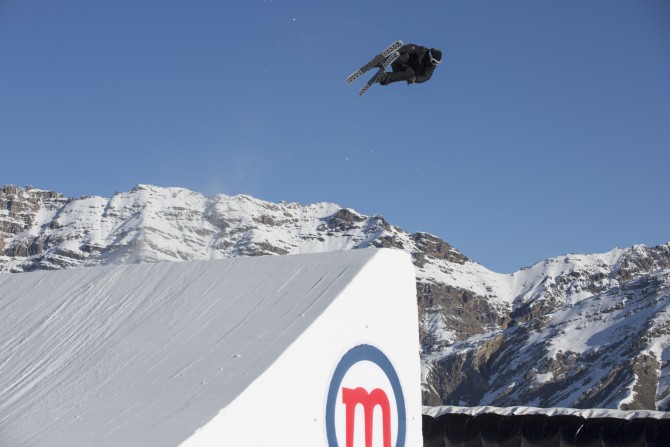 Tell us about the lifestyle of a professional skier…

“It’s fairly relaxed in comparison to some other sports, I guess, but I like to keep myself fit regardless. When I am at home, I spend a lot of time in the gym, varying my workouts to keep it interesting. I also do trampolining to keep my spatial awareness at its peak and to learn new tricks.

Obviously, I try to be on snow as often as possible and in that sense, there isn’t really a summer/winter for me as the team tends to follow the snow—when winter finishes in Europe we head to New Zealand to continue training and competing. So, for me winter generally lasts for around 9 months every year!”

How much of your time is spent competing & training?

During the season, I’m given a schedule by my GB coach, Pat Sharples—he will select the best competitions for me and we will generally organise training to fit in among the competitions. This season I am going to be mainly based in Laax, Switzerland, but will also be spending a lot of time in Livigno, Italy to maximise my use of the new GB airbag, which is a real game changer.

What's the first step in becoming a professional skier?

Start by getting involved with your local ski centre, entering local and then national competitions and it will progress naturally from there—don’t force it to happen.

What should anyone looking to become a pro skier be prepared for?

Take advice from Snowsports England and set yourself some realistic goals.  Thirdly, be prepared for injuries, it is going to happen and you have to be mentally strong to get yourself through the tough times. Finally, makes sure you enjoy it, it’s hard work, but I feel incredibly lucky and privileged to be travelling the world doing something I love!