What is a Pole Plant?

What are ski poles for?

As a beginner skier, the first time you come across poles is when you're trying to juggle them as you collect your skis, boots, helmet...and these lethal poles! You have no idea how you're going to use them but best cling onto them just incase. It's likely you'll have two purposes for your first few lessons - something to lean on as you put on your skis, and helping you to move along the flat sections.

At The Snow Centre and in most ski schools I have taught in, we leave the poles on the floor in the early stages of learning because they just become a distraction. It is important that you concentrate on the your BALANCE and managing your essential equipment first.

Once you can manage a basic turn in a snowplough, you'll begin to learn how to accomplish more complex movements and start to challenge yourself by increasing speed and finding steeper terrain. At this stage you'll hold the pole loosely to aiding balance by becoming an extension to the arms.

How do I effectively pole plant?

In alpine skiing a sound posture will include the arms and hands positioned away from the body, aiding balance. When holding poles, regardless of skiing ability we generally see the pole as an extension to the arms (giving a bigger balancing aid) and diverging indicating a rounded and relaxed back. 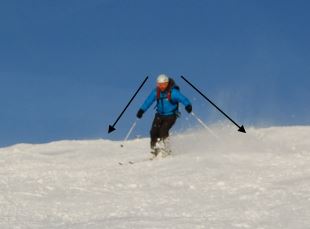 You can see how this skier maintains a wide arm position with the pole separating.

As a starting point we need to learn to ski holding the pole in a relaxed and natural position. When teaching early skiers this is the first priority with poles before planting the pole.

When the time comes to consider WHY a skier may use a pole to aid skiing there are many different reasons, depending on where you are in the skiing development journey.

We can already see how we have started to use the pole as a balancing aid.

As we develop and actively start to use the pole as a “planting” movement this can act as a trigger which tells you that you're about to make a series of movements. It’s a kind or reminder and sets a nice pace to your skiing. 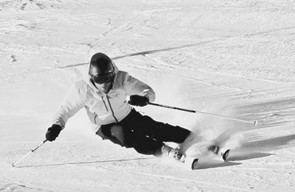 In this shot the skier’s feet (skis) are still continuing around the old curve, however you can see the pole is anticipated in readiness to plant. This will aid the skier’s mass move in the direction of the new curve. Not only is this pole action assisting balance, but it is also helping the skier move with accuracy and offering support as the skis change edges. The pole will connect as the skier moves through in to the new curve.

In shorter turns (medium to very short) the pole action is active and as it connects with the ground it allows the skier to influence the direction the skis are travelling (currently around a curve) by breaking the tendency for the skis to continue around the current curve. The moment of support allows the skier (if set up well) to change the skis edges and start the cycle again, but in the new direction. This is repeated with rhythm in a typical decent. 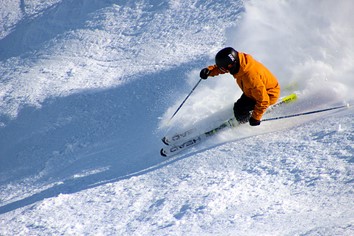 As you begin to ski at higher speeds you seek greater performance out of the ski allowing you to grip with more accuracy. As you ski faster around a curve the forces at play increase so you make bigger lateral movements to resist being pulled outside the curve. The higher the speed, the greater the force that will need to be resisted. A pole plant here may NOT connect actively as this COULD have the tendency to block the flow of your mass laterally across the skis. However the pole action would still be at play at its very movement helps pull you in to the new curve. The faster the speed, the longer the turns, the further away from the skis the pole will planted. This is to allow for greater lateral movements which are more effective at resisting strong forces. 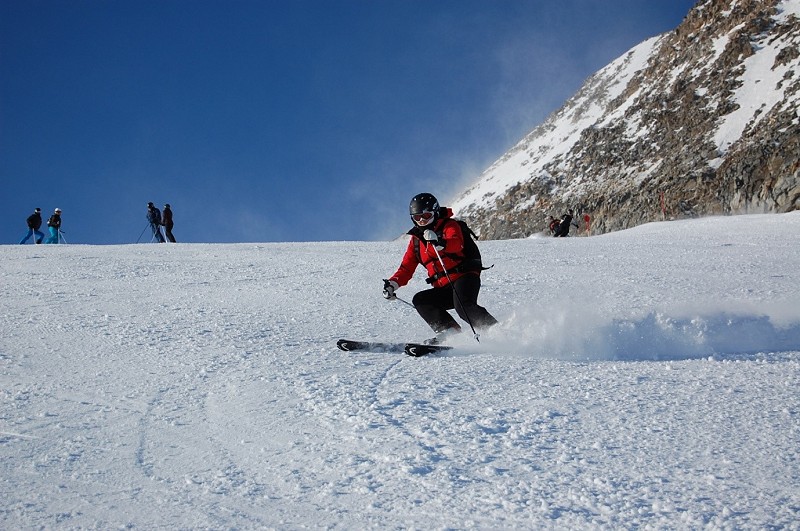 It is clear to see comparing the shots above that although different levels of skier both are at the same point in the turn and beginning to anticipate a change of direction. The pole has started to move and is close to the point of connecting making the direction change easier as the skis change edges.