HOME > NEWS & EVENTS > Skiing Tips >How to Use Ski Poles

How to Use Ski Poles

The Snow Centre’s Head of Snowsports describes how and why we use poles in alpine skiing.

What are ski poles used for?

Ski poles, also known as ‘sticks’ or just 'poles' are used by skiers for balance, rhythm, accuracy, timing and support.

Usually made from either aluminium, fibre glass, carbon fibre or a combination of the three, ski poles can vary in design. Most ski pole designs can be used for all types of skiing, but there are a few that are specifically engineered with the ski discipline in mind. For example ski racers may have lighter weight, shaped poles to allow for faster speeds.

How to use ski poles

Your first encounter with poles begins as you leave the hire shop. Along with your skis and boots you are armed with these lethal pointed sticks! In reality their use will be limited to supporting you as you put the skis on, and aiding you in pushing along the flat areas.

At The Snow Centre and in most ski schools I have taught in, we discard poles early in the learning process as they actually become a hindrance and a distraction. It is important that the learner focuses on the fundamentals of balance and managing their equipment first. We need to dominate our equipment and not have it dominating us!

Once a skier can process a basic turn using a snowplough they begin to learn how to execute more complex movements and start to seek challenges. These challenges are relative to the learner, but in short, they “test” their steering ability. At this stage, the pole held loosely in the hands, becomes an extension to the arms.

In alpine skiing, a sound posture will see the hands and arms positioned away from the body, aiding balance. When holding poles, regardless of skiing ability, we generally see the pole as an extension to the arms, providing a bigger balancing aid, and diverging, indicating a rounded and relaxed back. 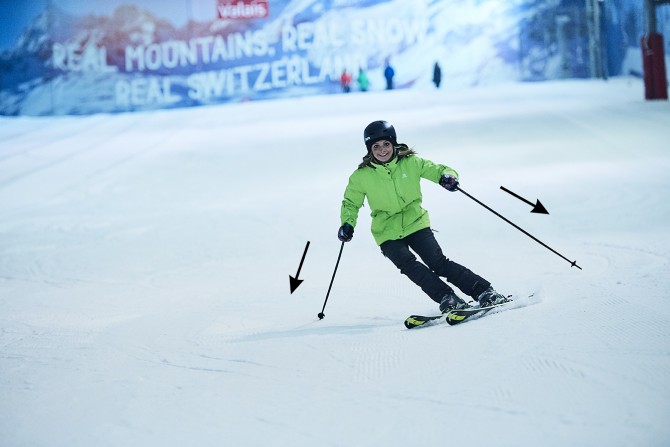 You can see how the above skier maintains a wide arm position with the pole diverging.

As a starting point, we need to learn to ski holding the poles in a relaxed and natural position. When teaching early skiers, this is prioritised over learning to plant the pole.

When the time comes to consider why a skier may use a pole to aid skiing there is a simple acronym that can be remembered.

All or Any of the themes in the acronym will be a positive way to use poles whilst skiing. A skilful skier uses all of them and blends them into the performance.

Rhythm is key to linking all the movements together in order to ski with flow and efficiency. When delivered at the right point, the pole plant helps us move with greater accuracy into a new curve, which helps with the timing of repetitive movements. Finally, as the skis (feet) move from one turn to the next the pole provides support as the centre of mass (around the belly button in an adult) moves from the inside of the old curve. 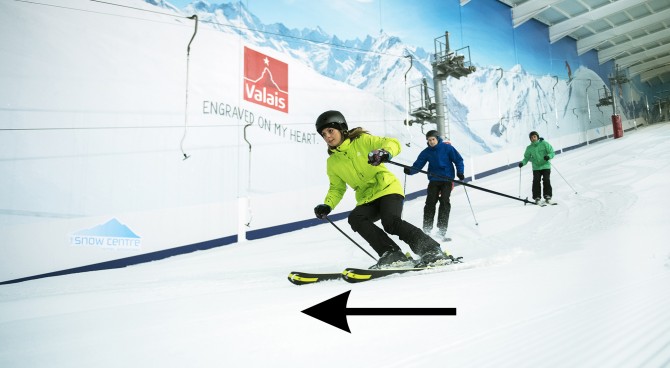 In the above shot the first skier’s feet (skis) are still continuing around the old curve, however you can see the pole is ready to plant. This aids the skier’s mass movement in the direction of the new curve. Not only is this pole action assisting balance, but it is also helping the skier move with accuracy and offering support as the skis change edges. The pole will connect as the skier moves through into the new curve.

In shorter turns, the pole action is active and as it connects with the ground it allows the skier to influence the direction the skis are travelling by breaking the tendency for the skis to continue around the current curve. The moment of support allows the skier to change the skis edges and start the cycle again, but in the new direction. This is repeated with rhythm in a typical decent.

How to use ski poles when skiing at higher speeds

As a skier begins to ski at higher speeds they seek greater performance from the ski, allowing them to grip with more accuracy. As they ski faster around a curve the forces at play increase, so the skier makes bigger lateral movements to resist being pulled outside the curve. The higher the speed, the greater the force that will need to be resisted.

A pole plant at this pace may NOT actively connect with the snow as this COULD block the flow of the skier’s mass moving laterally across the skis. However, the pole action is still important, as it’s very movement helps pull the skier into the new curve. The faster the speed, the longer the turns, and the further away from the skis the poles will be planted. 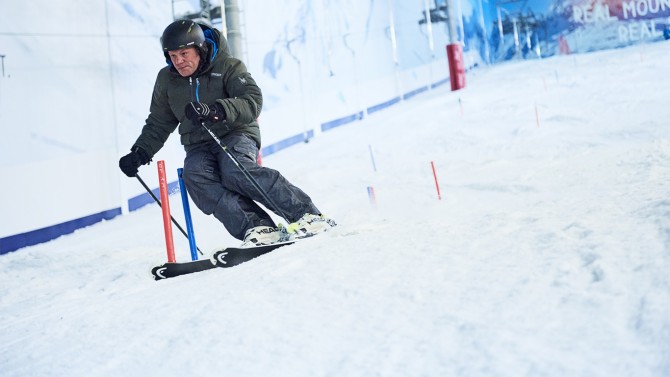 At different levels of skiing, the still shots above demonstrate the varied use of poles.

More information on pole planting can be found on The Snow Centre’s Ski Lessons.