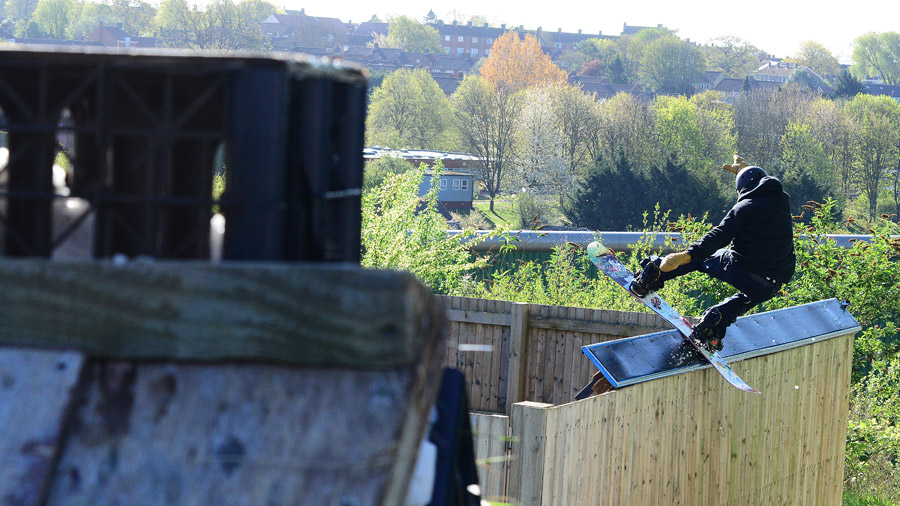 Team GB's Olympic Slopestyle Snowboard finalist, Jamie Nicholls defied the laws of gravity again with the release of the footage of his 2nd extreme stunt on, off and around The Snow Centre’s real snow slopes

In 2014 Nicholls, filmed a similar creative route down the centre’s Lesson Slope, but no one could have guessed the video’s creative approach to snowboarding would become a viral phenomenon, receive more than 7 million views and appear on Sky and BBC’s Ski Sunday!

Starting outside the back of the centre with a huge drop off a railing, Jamie’s 2014 ‘Hemel snowboard run’ saw him ride through a very narrow doorway onto the largest Lesson Slope in the UK, whilst styling some tricks on a jump and a rail on the way down! The 21 year old athlete then sped through a corridor, round a tight bend and out into The Snow Centre car park, where he proceeded to jump 4ft onto the railings!

But, 2015’s stunt took ‘indoor snowboarding’ to a whole new level! With a brand new route around the outside of the building and past The Snow Centre’s 160m Main Slope, Jamie’s 2015 performance saw him complete 7 different daring snowboard tricks, in the most creative journey down the UK Slopes. Completing a Switch Frontside Rodeo 540 Spin (a frontflip with a 540 degree spin in the air) as he gapped a stair way from inside the indoor ski and snowboard centre and landed outside in the car park, a crowd had gathered to witness his jaw dropping finale!

The Snow Centre’s Team worked through the night to build this exciting course for the GB Park and Pipe Snowboarder, moving tonnes of snow outside the building and shaping jumps, boxes and rails in the most unusual spots. The run took more than 17 Hours to build and a 4am start on the Monday morning saw Jamie complete filming for the stunt’s full release in September 2015.

Jamie said “I was so excited planning for 2015’s ‘Hemel Run’, it’s definitely bigger and better than last year’s! This time we had the Red Bull winch, which helped me reach greater speeds and so much support from everyone, including GB Park & Pipe, Red Bull ,The Snow Centre, Nike, Salomon and UK Sport.”

The Snow Centre’s Managing Director, Ian Brown said “We are delighted to have worked with Jamie on his 2nd project here at The Snow Centre. We look to inspire the progression and enjoyment that can be had by all whom participate in snowsports.”

Following the release of the Hemel Run 2 footage on Tuesday 8th September, Nicholls and The Snow Centre Team shared a few interesting facts about the making of the much talked about film;

For more information on Jamie's Hemel Run 1 and 2 visit jamienichollsuk.com.