Jamie Nicholls & Aimee Fuller Finish the Season on a High

It was a good day for The Snow Centre’s Olympic snowboarders at the Slopestyle World Cup, the Audi Snow Jam in Spindleruv Myln, Czech Republic this week. Olympian’s, Aimee Fuller and Sochi’s 2014 finalist, Jamie Nicholls ended their Olympic qualification season with a bronze for Jamie, and a 4th place finish for Aimee.

On Saturday 25th March 2017, Aimee Fuller stepped up to the start line of the 4 rail, 1 hip and single jump Audi Snow Jam course, after qualifying directly to the final with one of the best runs of her season. Consisting of a cab under flip on the jump, and a rail combo that included a backflip out of the hip, Aimee was set to finish the season on a high.

In the 3 run final Aimee landed an equally impressive set of tricks, finishing with a 4th in this year’s Czech Republic World Cup. The result puts her in more than good stead for qualifying to the 2018 Olympics in South Korea’s Pyeongchang. Currently 5th in the Slopestyle world FIS rankings, with the top 30 women in Slopestyle and Big Air combined qualifying, Aimee’s chances of competing in Pyeongchang 2018 are pretty good.

Meanwhile, Jamie Nicholls also competed in Spindleruv Myln’s World Cup final, but in the men’s category. Following a few mistakes during his qualification run, Jamie managed to make it through to the semi-finals. Back on form, he showcased a string of technical rail tricks and a backside 1260 spin on the jump, to cleanly claim a spot in the final round of the competition.

As last year’s Audi Snow Jam winner, Jamie bettered his finals 2016 slopestyle run with a Cab 1440 Spin on the jump, and finished the competition on the podium with a bronze medal. Allowing him to complete the Olympic qualification season with an overall Slopestyle FIS World Cup silver medal. Claiming Slopestyle’s 2nd place, Jamie comfortably sits within the Slopestyle and Big Air combined Olympic qualification criteria of the ‘top 40 men’ bracket. 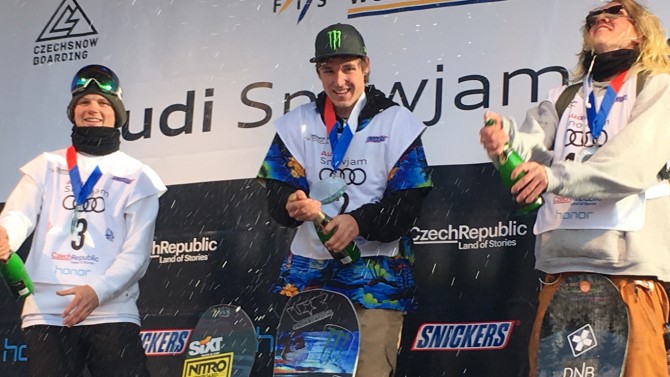 The Bradford born snowboarder, who now trains regularly at The Snow Centre, Hemel Hempstead said, “I’m really happy to have stepped up my run from last year, even though it wasn’t enough to match my 1st place finish. I’m pleased to be on the podium again — and taking 2nd place in the overall FIS results was a really nice surprise!”