How Snow is Groomed at The Snow Centre 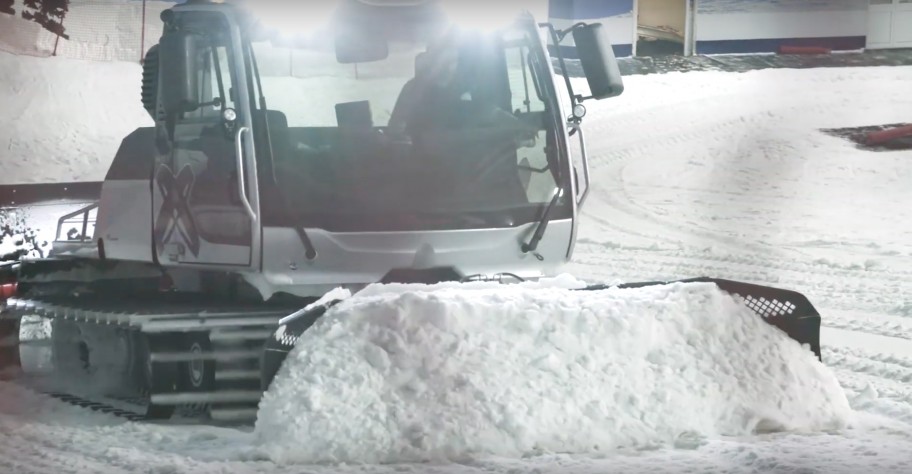 Freshly groomed, waist deep or an early morning dusting, snow is a ‘hot’ topic at the indoor ski slopes of Hemel Hempstead! And making and maintaining good quality snow indoors is a challenge The Snow Centre Team take great pride in!

So, if you have ever wondered HOW or WHO makes the white stuff on The Snow Centre’s indoor slopes, you should be sure to meet ‘Keeper of the snow’ Dave Wilkinson and his Team.

Each morning guests will find freshly groomed snow spread across The Snow Centre’s 160m Main Slope and the largest real snow Lesson Slope in the UK, because the piste basher and The Snow Centre team have been working through the night to give you the perfect piste conditions.

What machine do you use?

At the moment we’re in a Prinoth Husky with ex building capabilities 5.1l Diesel turbo Mercedes engine which produces 231 bhp – few points with this machine - we don’t have a steering wheel, we control the machine by sticks which gives us greater precision in the movement of the and the blade is a lot more precise and I’ve got angles that tell me where on the slope the blade is compared to with the machine which helps give me a better finish.

Why does the slope need to be groomed?

The purpose of grooming the snow is to push all the snow on the slope from the sides back into the middle, and to give the slope a nice finish ready for the next day’s Snowsports activities. It needs to be groomed because the snow gets pushed to the side, and when we make fresh snow it needs to be mixed with the older snow that is already out here to create a consistent skiing base.

If we didn’t groom the slope, we’d get big moguls start to appear and icy patches and after 3 or 4 days in the winter and up to 2 weeks in the summertime, the slope will become un-skiable.

How long does it take?

Most of the year it takes around an hour to an hour and a half. In the height of the winter it can take 2 hours. It can take longer putting in freestyle features because we need to get the snow in the right positions ready for the rails or the kickers, and of course we are also working with other team members and we need to be careful of what we’re doing around them. We want to be on and off the snow as quickly as possible to ensure minimal movement of the snow before we let it rest.

Why don’t you groom the slope during the day?

The reason we don’t groom during the day, is once we groom the slope, the snow needs time to rest! All the snow crystals need up to 5 hours to rest, rejoin themselves and create a firm skiing surface. If we groom and allow people back on the slope straight away, within about an hour, the snow would be in a worse condition than it was beforehand.

Why is grooming indoors difficult?

The main difficulties when grooming the slope is the snow depth. Being indoors we have a maximum snow depth of 50cm of snow to play around with, so we need to keep an eye on the side of the slope where we have markers as well as how low it is in the middle, where the good snow is, where the bad snow is, and move it around accordingly.

Is the snow real?

Our snow is 100% real. It is made by 10 snow guns, with water pressure at 21bar, air pressure at 10 bar. And when that mixes it creates a mist, which we blast out from the gantry, and when it hits the atmosphere at around about -4°c, it creates snow crystals. But everything you see is real – we are just creating nature but on a smaller scale!