Behind the Scenes for Lights Out at The Snow Centre

On Thursday 10th August 2017, when most of us were tucked up in bed, 5 skiers and 5 snowboarders, 3 cinematographers, 1 sound man and The Snow Centre’s park builders, were preparing to pull an all-nighter on the Hemel Hempstead slopes — all in the name of creativity.

It’s no secret that freestyle skiing and snowboarding is a daringly, creative sport. What could be more artistic and adventurous than styling tricks and landing impressive stunts, on rails, jumps and snow? How about doing it in the dark?

The Snow Centre’s park night videographer, Max Presky hoped to boost the sport’s risk factor and creativity even further, with his idea to shoot some of Hemel Hempstead’s best freestylers in the dark.

However, in an effort to capture their tricks on film with the lights off, the riders would have to pull-out some of their best tricks with minimal visibility—and the park builders would need to create a challenging park, shaped so well you could ride it with your eyes shut.

The Lights Out Build… 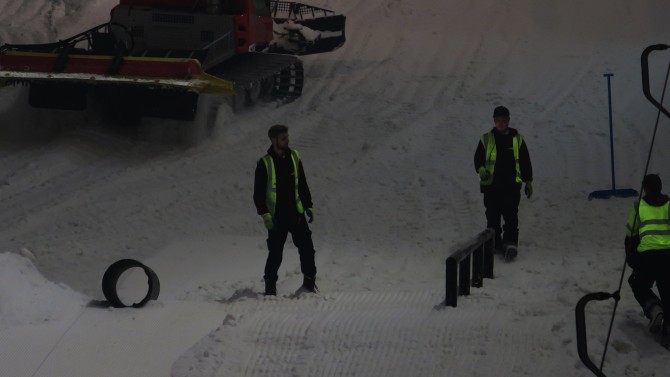 When the slope closed at 10pm on the evening of Thursday 10th, The Snow Centre’s park team had until 1am to groom the slope and build a suitable park before the lights went out.

Running a tad behind schedule, the lights actually went out at 1.56am, once the park builders had put out two jumps, one with a gap to rail, the Adidas wall ride, The Snow Centre’s rainbow box, the InTheSnow Rail, and a really long bibby.

Park Manager, Kris Amstutz said “Building this setup was one of most exciting builds this year! Designing the park involved working alongside the videographers and riders to create something that would aesthetically work in the dark, but also provide the riders with the multiple trick options. The park shapers gave it their all, and the park looked perfect!” 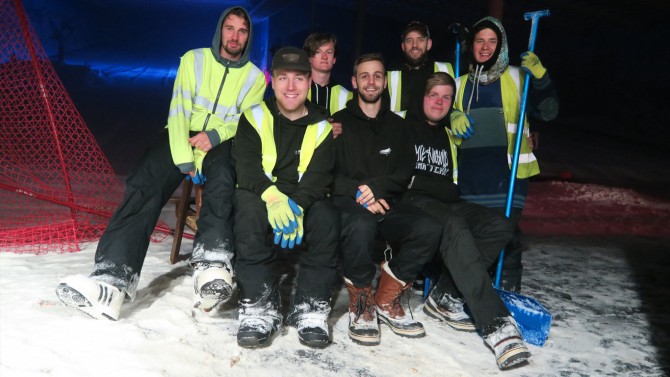 (ABOVE, THE SNOW CENTRE'S PARK TEAM)

The Lights Out Riders…

Both, skiers and snowboarders should have been pretty proud of their lights out sliding abilities. While the features were lit with spot lights, the landings and take-offs were dark, so it took some skill to feel for the snow. 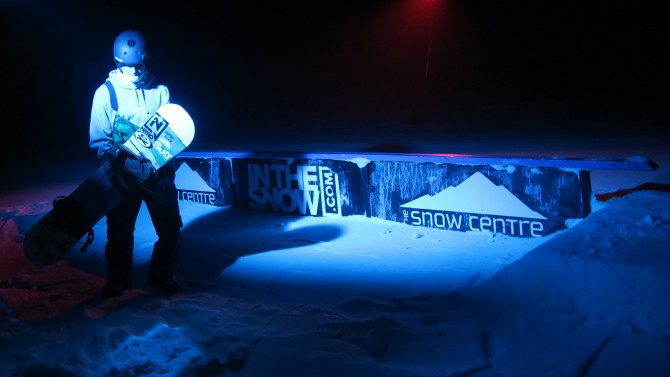 Following a nights filming, that didn’t see the riders leaving until after 6am on the morning of Friday 11th August, most made a quick exit to get some kip. The final video showcased some pretty incredible filming as well as an assortment of big and technical tricks on the rails and jumps. Not bad for a bunch of park rats having fun in an unlit park!

Olympic Snowboarder, Jamie Nicholls said “Its good to mix things up now and again, and see if you can land your tricks in a more challenging environment. Having the lights off, means you really have to trust your instincts more, and react to what you feel is happening.”

The Lights Out Film…

The film’s director, Max Presky describes the idea and the outcome of the film, “Lights Out’ was a passion project I have wanted to shoot for a few years now. The idea came from skate videos which were shot at night, the rider comes out from the darkness, does their trick and rides off into the shadows. I wanted to emulate this in The Snow Centre, but bring my own style and cinematic twist. 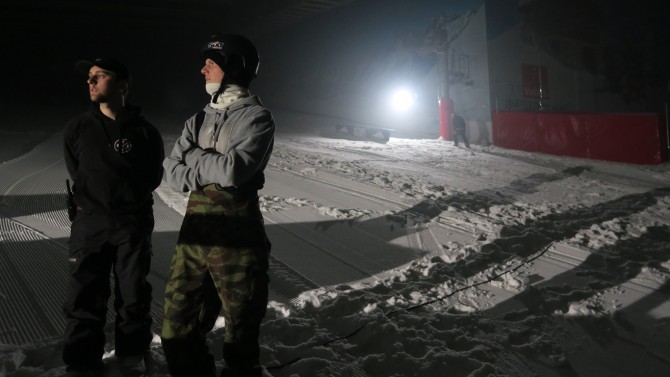 We rented two Arri film lights, set one to blue and one to red. These and the haze machine gave the atmosphere we were looking for.

Thanks to the park team who smashed out the park to perfection, Tom Coe on the Ronin and Oliver Munks getting the long lens shots, the snowboarders and skiers who rode through the night dropping bangers and The Snow Centre, of course, for helping to make it happen! We couldn't have done it without this amazing crew.”

Watch the Lights Out film...